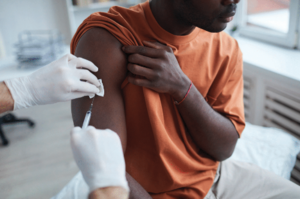 Vaccinations have served and continue to serve a critical role in altering many disease courses for our society. Infections that previously caused significant morbidity and mortality are now preventable through this technology. Vaccinations remain especially important for the HIV-positive population because immunosuppression increases the risk and severity of vaccine-preventable diseases.

There has been some concern that the immunocompromised state can alter vaccine efficacy, leading to blunted immune responses. For most patients living with HIV, however, adequate vaccine responses to confer protection can generally be achieved with viral suppression and immune reconstitution.

It is also previously thought that immunizations may increase HIV disease progression through activation of CD4 cells, which in turn can accelerate the replication of HIV. Transient increases in HIV viremia were hypothesized; however, data is conflicting to support this theory. Ultimately, the benefits of vaccination outweigh the risks.

Individuals living with HIV should receive all standard immunizations indicated for the general adult population in addition to HIV-specific vaccinations; these are summarized below.

COVID-19. Like many other vaccines, the immunogenicity of COVID vaccines is unknown in the HIV population, especially in those whose CD4 is <200 cells/microL, as there was limited representation in these clinical trials. However, because people with HIV are at risk for severe COVID and for developing complications, the benefit of vaccination outweighs the risk.

The safety and efficacy of interchanging doses between the mRNA and adenoviral vector vaccination has not been studied, and it is not recommended to do so at this time except in extenuating circumstances when the second mRNA vaccination cannot be completed (i.e. contraindication such as anaphylaxis). In this scenario, it is recommended to wait at least 28 days from timing of the mRNA vaccination prior to giving the adenoviral vector vaccine.

Human Papilloma Virus (HPV). HPV vaccination is indicated for individuals £ 26 years of age and is given as a three-dose series at 0, 1-2 and 6 months. While it is FDA-approved for ages 26-45, the Advisory Committee on Immunization Practices (ACIP) does not recommend routine vaccination for this group. The decision to vaccinate for HPV in this age group is determined through a shared clinical decision between the patient and clinician weighing the risks and benefits of vaccination.

Measles, Mumps, Rubella (MMR). MMR vaccination is not often needed for adults as it is routinely given to children and adolescents with subsequent development of immunity. Occasionally, adults lack immunity to MMR, and in this scenario, vaccination is recommended.

Evidence of immunity can be defined as birth before 1957, documentation of prior history of vaccination, or laboratory evidence of immunity. The MMR vaccine is an attenuated live virus vaccine and can be given to those with HIV when needed whose CD4 cell count is ³200 cells/microL. It should be given as a two-dose series 28 days apart.

Herpes zoster (Shingles). There are no specific recommendations for herpes zoster vaccination in HIV-positive individuals; however, it is indicated for the general population in adults ³ 50 years old. There are two types of the vaccine: the recombinant zoster vaccine (RZV) and an attenuated live virus vaccine (ZVL).

The RZV (Shingrix) is the preferred vaccine and is given as a two-dose series greater than 8 weeks apart. If the recombinant zoster vaccine is unavailable, the ZVL (Zostavax) vaccine can be given as a single dose if the CD4 cell count is ³200 cells/microL. Patients without exposure to varicella (either through natural infection or vaccination) should receive the varicella series first.

Tetanus, Diphtheria and Pertussis. Tetanus toxoid, Diphtheria toxoid and acellular Pertussis vaccination (Tdap) is recommended for all individuals as an adult to address waning Pertussis immunity including those with HIV. Tdap should be given to every adult aged ³19 years old followed by Tetanus, Diphtheria (Td) vaccine every 10 years.

Vaccinations Recommended Specifically for Those with HIV

Hepatitis B virus (HBV). HIV and hepatitis B share the same modes of transmission, usually through sexual activity or injection drug use. HIV-positive individuals are less likely to clear hepatitis B viremia or to develop a protective antibody response through development of an HBV surface antibody.

Meningococcal. Most meningococcal cases reported in those with HIV in the United States are due to serogroups ACWY. HIV increases the acquisition risk of invasive meningococcal disease, and vaccination is recommended with the conjugate meningococcal vaccine. There are no specific recommendations at this time for vaccination against meningococcal serogroup B unless it is indicated for another reason (asplenia, complement deficiencies or aged 16-23 with shared clinical decision-making).

There are two formulations of the conjugate meningococcal vaccine. Menveo (MenACWY-CRM) is given as a two-dose series ³ 2 months apart. Menactra (MenACWY-D) is also given as a two-dose series ³ 2 months apart; however, series initiation must be given ³4 weeks after completion of pneumococcal conjugate vaccine doses to avoid interference with the immune response to the conjugate pneumococcal vaccine (Prevnar). The meningococcal conjugate vaccinations are interchangeable if needed, but it is recommended to complete the series with the same product if possible.

Pneumococcal. Pneumococcal vaccination is recommended for HIV-positive patients. There are two formulations of vaccine available: a 13-valent conjugate vaccine (Prevnar 13) and a polysaccharide vaccine (Pneumovax).

Even with control of viremia and achievement of immune reconstitution, evidence has shown that those living with HIV are at increased risk of many diseases. Immunizations in this vulnerable population are critical to help mitigate significant morbidity and mortality that can be associated with vaccine-preventable diseases.

While there is a concern for decreased immunogenicity in HIV-positive patients, many of those living with HIV are able to achieve adequate vaccine efficacy through antiretroviral therapy and immune reconstitution. Discuss the vaccination with your HIV-positive patients at each visit.