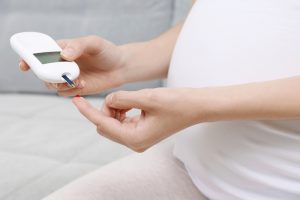 Non-obstetric surgery occurs in approximately 1 in 600 pregnancies and can be uniquely complicated by poorly controlled diabetes mellitus, which is associated with adverse perinatal, obstetric and neonatal outcomes. Operative procedure, anesthesia, disrupted meal schedules and altered nutritional intake can lead to labile blood glucose levels, and good glycemic control is key to ensuring a successful maternal and fetal outcome for the pregnant woman undergoing non-obstetric surgery.

For example, Type 1 DM occurs secondary to an autoimmune destruction of the pancreatic islet beta-cells and is an insulin-deficient state.3 This disease process typically occurs early in life, requiring insulin therapy for treatment and is more susceptible to ketoacidosis if no therapy is initiated.

This stress response can result in further metabolic abnormalities in the pregnant woman as this leads to insulin resistance, decreased peripheral glucose utilization and impaired insulin secretion, resulting in hyperglycemia or even ketosis. Due to physiologic changes in pregnancy, there is a greater tendency towards ketosis, and diabetic ketoacidosis (DKA) can occur at lower glucose levels and often progress more rapidly as compared with the non-pregnant patient.

Antepartum Management
Management of DM consists of dietary modifications, exercise and pharmacologic therapy. Capillary blood glucose monitoring should be performed four times a day: fasting and 1 or 2 hours postprandial with the goal to maintain a fasting glucose level <95mg/dL and 1-hour level <140mg/ dL or 2-hour level <120mg/dL. Dietary therapy consists of caloric intake of approximately 30 kcal/kg/day divided into three meals and three snacks. Calories should be divided as 40-50 percent carbohydrates, 20 percent protein, and 30- 40 percent unsaturated fat to help maintain a low glycemic index. If unable to be achieve goal target values through diet and exercise, then pharmacologic therapy with insulin or an oral hypoglycemic such as metformin or glyburide is initiated.

All subcutaneous insulin types used for treatment of DM have been approved for use in pregnancy as they do not cross the placenta. Insulin requirements increase with gestational age and insulin should be adjusted accordingly throughout pregnancy. In general, insulin needs in the first trimester range from 0.7-0.8 U/kg/d, second trimester from 0.8-1 U/kg/d, and third trimester from 0.9-1.2 U/kg/d.

Oral hypoglycemic agents typically used in pregnancy are metformin or glyburide. Metformin is a biguanide that inhibits hepatic gluconeogenesis and glucose absorption and stimulates glucose uptake in peripheral tissues. Metformin does cross the placenta, and dosing usually starts at 500 mg nightly for a week then increasing to 500 mg twice daily due to common adverse side effects of abdominal pain and diarrhea. The maximum dose of metformin is 2,500-3,000 mg per day in two to three divided doses.

Glyburide is another suggested oral hypoglycemic agent and is a sulfonylurea that binds to pancreatic beta-cells to increase insulin secretion and insulin sensitivity of peripheral tissues. Glyburide crosses the placenta, and the common dosage of glyburide is 2.5-20mg daily in divided doses, but doses up to 30 mg may be necessary to achieve adequate glucose control.

Surgical Considerations
In general, well controlled blood glucose prior to surgery is associated with fewer complications, and decisions regarding management depend on the patient’s current regimen, which may include insulin, oral medications or diet alone. The goal of perioperative diabetes management is to avoid hypoglycemia, avoid marked hyperglycemia and prevent ketoacidosis. The optimal perioperative glucose targets are unclear, and there is little evidence to support specific targets.

Based on expert opinion, perioperative targets for the non-pregnant patient are between 110 and 180 mg/dL. For the pregnant patient, it is recommended to maintain glucose levels within target ranges of fasting <95 mg/dL and 1-hour <140 mg/dL or 2-hour postprandial <120mg/ dL, if possible, keeping in mind to avoid hypoglycemia, which can be reduced by frequent glucose monitoring, and to avoid marked hyperglycemia as there is a tendency towards ketosis in pregnancy with DKA observed with glucose levels as low as 180 mg/dL.

Ideally, surgery should be performed early in the day to avoid prolonged fasting. The patient should take a full dose of insulin the night before surgery and take no insulin the morning of surgery. Even on a nothing by mouth (NPO) regimen post operatively, the patient should be advised to take one-half to two-thirds of their basal insulin regimen.

While inpatient, blood glucose levels can be drawn every 4-6 hours, and corrective insulin given using a sliding scale administered to maintain blood glucose levels at target ranges. Once home or eating, regular insulin regimen can be restarted. For a diabetic on oral medication, the perioperative management depends on the length of the surgical case. If surgery is short or an anticipated same-day discharge, minimal change in medication is needed. Table 2 provides a guide to management of oral agents in the perioperative period.

Prevention of ketoacidosis is one of the main goals of perioperative diabetes management, as this is an acute life-threatening complication for the mother and her fetus. Pregnancies complicated by DKA are associated with increased rates of maternal and fetal morbidity and mortality, with rates of fetal loss estimated to range as high as 10-25 percent. DKA in pregnancy can occur in lower glucose levels and often progresses more rapidly as com- pared with the non-pregnant patient. A discussion on diagnosis and management of DKA is beyond scope of this article, but it is imperative to have a low threshold for evaluating the pregnant patient for DKA in the perioperative setting. Pregnant women may present with abdominal pain, nausea and vomiting, lethargy and altered mental status, and laboratory evaluation will demonstrate acidosis with a low arterial pH <7.3, anion gap >12 mEq/L, serum bicarbonate level <15mEq/L, and serum ketones. Suspected DKA is a medical emergency and requires multidisciplinary management by a maternal-fetal medicine specialist and endocrinologist.

Non-obstetric surgery for the diabetic pregnant patient can pose a significant risk. The key to perioperative management is to avoid hypoglycemia, avoid marked hyperglycemia and prevent ketoacidosis. Multidisciplinary management with maternal-fetal medicine and endocrinology should be considered.