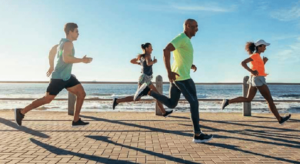 In 490 BC, after the Greek town of Marathon successfully defended Persian attack, the messenger Pheidippides is said to have run to Athens to deliver the news. Upon arrival, as he exclaimed “Nike!” (victory, win), Pheidippides collapsed and perished.

While this legendary story represents the premise for the modern-day marathon, it can also be said to lay claim to the first documented case of sudden cardiac death (SCD) in the athlete. Two millennia later, tragic cases of sudden death in athletes still garner significant and appropriate media attention and public scrutiny.

Moreover, the impact of intense exercise on cardiovascular function, cardiovascular disease, and long-term health outcomes remain controversialin certain populations of highly conditioned individuals. As elite athletes, such as Benoît Lecomte (who swam across the Atlantic Ocean and plans to swim across the Pacific Ocean next year), continue to challenge the limits of human physiology and embrace the extremes of physical performance, practitioners charged inthe cardiovascular care of athletes are challenged with providing the most appropriate and evidence-based care to these fittest of individuals.

In 2002, the World Health Organization warned that physical inactivity is a global problem associated with major causes of death and disability in the world.(1) It is well established that physical inactivity correlates with significant cardiovascular morbidity in the United States,including obesity, diabetes, and most cardiovascular diseases. Indeed, as many as 250,000 deaths per year in the United States are attributed to a lack of regular physical activity (2), and a scant few Americans achieve 30 minutes of daily physical activity.(3)

Despite the ongoing epidemic of physical inactivity and obesity present within western society, there is also an expansive growthgroupof individuals who are engaged in high levels of exercise and athletic training far beyond the recommended American Heart Association (AHA) guidelines. Perhaps best representative of this exercise “boom”are the number of individuals participating in U.S. recreational road races.

From 1990-2013, the number of road race participants rose from just over 5 million to 19 million finishers, with female runners now representing the majority of race participants. While these statistics have leveled over the last several years, the interest in fitness and recreational exercise events will likely continue to grow.

Notably, as aging recreational athletes grow in number, cardiovascular disease and risk remain present. Appreciating that the cardiovascular counseling, guidance, and clinical management of athletic patients are different compared to members of the general population represents an important tenet of sports cardiology.

Sports cardiology is generally defined as the preventive cardiovascular care for athletes. While the definition of an athlete is debatable, we choose to define an athlete broadly, as any individual who places a high premium on exercise and athletic performance. As such, competitive athletes at any level (secondary school, collegiate, professional), recreational athletes (participating in community- sponsored events or have a commitment to fitness), and athletes of all ages (youth to master) are consistent with an “athletic patient” who may seek care and counseling in the sports cardiology clinic.

While it is reassuring that these events remain rare in occurrence, pre-participation cardiovascular screening represents an essential process for the athlete prior to competitive athletic training. Whether the addition of the 12-lead electrocardiogram (ECG) to the standard targeted history and physical provides additional sensitivity and leads to improved clinical outcomes remains a significant source of controversy.

In the U.S., pre-participation cardiovascular screening guidelines for competitive athletes, endorsed by the American College of Cardiology (ACC) and AHA, currently consist only of a targeted history and physical.(6) However, with recent data suggesting differential risk of SCD in specific collegiate athletic populations,(7) the uncertainty of the best evidenced-based strategy in the cardiac screening of youthful athletes persists.

While screening for occult cardiovascular disease in youthful athletes represents a point of emphasis in sports cardiology, master athletes (in general >35-40 years old) typically represent the majority of patients cared for in the sports cardiology clinic. For master athletes, occult coronary atherosclerosis underlies “the sports paradox” that has been described for many years.

Despite the established cardiovascular health benefits of exercise, there is a small transient increased risk of acute myocardial infarction or SCD during vigorous exercise. More recent data suggest that, in rare cases, extreme endurance exercise in master runners with cardiac risk factors and stable coronary disease may also precipitate a cardiac event.(8)

Additional controversies surrounding master athletes have recently arisen, including the loss of overall mortality benefit for those engaged in extreme levels of exercise, early onset atrial fibrillation, the development of arrhythmogenic and pathologic cardiac remodeling, and accelerated coronary atherosclerosis. (See Figure 1.).(9) While intriguing and provocative, it is important to recognize the limitations of the current available data. Most studies are observational and cross-sectional in nature, limited in subject numbers, and potentially confounded by the lack of carefully controlled data. It remains imperative that we emphasize the overwhelming prognostic benefit of exercise and the lack of causal evidence implicating a truly ‘pathologic’ exercise dose.

Open physician-patient dialogue and shared decision-making should guide the exercise prescription for active patients presenting with concerns or diagnosed cardiac issues. Athletes who question the safety of ultra-endurance exercise should be provided unbiased counseling based on the most recent evidence and allowed to make the best decisions that fit with medical standards of care and their own expectations and psychological well-being.

In 2011, the growth and recognition of sports cardiology led the ACC to launch its Section of Sports and Exercise Cardiology. Not surprisingly, this section was received with immediate enthusiasm, and current membership has grown to overmore than 4,000 practitioners. This strategic and important step from the ACC has catalyzed intense scientific inquiry in the field and further contributed to the development of the ACC’s annual Care of the Athletic Heart Conference. In 2014, the ACC further highlighted the emergence of sports cardiology in a State-of-the-Art paper.

Within the field of sports cardiology, there remain many important areas of uncertainty that impact the cardiovascular care provided to athletes of all ages and competitive levels. For youthful athletes, refining athletic ECG interpretations and determining the benefit of athlete ECG screening continue to represent critically important future directives.

Many unresolved controversies also exist for master athletes. Future studies will require the inclusion of “athlete-specific” risk factors, detailed phenotyping including imaging and biomarkers, and perhaps most importantly, the development of long-term master athlete registries.

In the Atlanta cardiology community, we are building programs and working with universities, professional sports teams, and rehabilitation, and local athletic organizations aimed at addressing the core tenets and directives of sports cardiology.

1. Physical inactivity a leading cause of disease and disability. http://www.who.int/mediacentre/news/releases/release23/en/.